Posted on June 16, 2016 by fionabrown
The Coutts Quarter Ton Cup 2016 opened in spectacular style off Cowes on Wednesday 15 June with three windward leeward races in the Central Solent in a building south westerly which produced fast paced action and more than a few classic Quarter Ton spills. The twenty-six strong fleet gave no quarter and it was nip and tuck at every mark rounding with place changes galore on each leg. Racing got underway in around 17 knots but it wasn’t long before the breeze was up to 20 knots with gusts of 25 knots, making for tough sailing for the notoriously tender historic little Quarter Tonners. 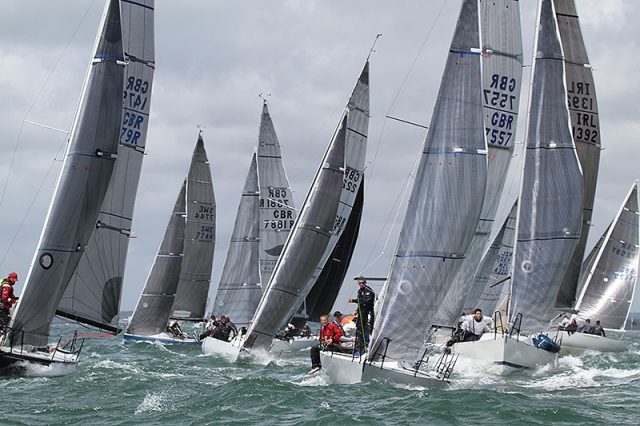 Race Officer Rob Lamb and his Royal Yacht Squadron Racing team did a superb job with the windward leeward courses, and the sailors took full advantage as event sponsor Coutts and their guests enjoyed ringside seats aboard the classic motor yacht Rum Jungle.

Fortunately, the odd pirouette didn’t prevent some great performances on the water and reigning Coutts Quarter Ton Cup Champion Louise Morton and her all girl team aboard Bullit revelled in the tricky conditions to win races one and three and take second in race two. They now lead the regatta overall by four points from Sam Laidlaw’s Rolf Vrolick designed Aquila with Ian Southworth’s Joubert Nivelt designed Whiskers two and a half points back in third and Willie McNeill’s Ceccarelli designed Illegal another half a point behind in fourth.

Back ashore the Whiskers crew of Ian Southworth, Tris Nelson, Mike Stannard, John Santy and Led Pritchard seemed slightly bemused to find themselves up in the chocolates having made their usual last minute dash to the regatta. “We’re just having a laugh and keeping it simple. We managed to keep the boat on her feet all day, but the same couldn’t be said of the crew. At one point we had a bit of a dead ants situation with all us in a heap in the cockpit with our legs in the air and Stan on the bottom trying to figure out why it had gone dark and what the heck had happened to the winch handle.” Joked John Santy.

Although there were a number of dramatic moments during today’s racing, one of the most marked things about the Quarter Ton fleet is the exceptional quality of the sailors and their outstanding seamanship. Despite the numerous broaches nobody went over the side, although Tony Harrison aboard Per Elisa did come close, just managing to hang onto the grab-rail and drag himself back aboard when he found that the high side had become the semi submerged side unexpectedly. Per Elisa’s tactician Graham Bailey explained saying, “Every now and then they spin out and you don’t get much notice. It was a drop where we had to take the pole off before the drop and the spinnaker momentarily collapsed and then pulled out to one side and we lost control of it. These things can escalate catastrophically so we were lucky Tony stayed with the boat. Our boat was built as a lake boat, but we just manage to hang onto the lead bunch today. Conditions to an extent determine which boats can do well, so we’re hoping for some lighter winds for the remaining races.”

At the apres sailing fleet BBQ, hosted by Class Chairman Peter Morton at Cowes Yacht Haven, there was much discussion about who had done the most broaches. Peter finally resolved the matter by asking all the skippers to stand up. He then asked those who had not broached all day to sit down, then those who had only broached once to sit down, then twice, then three times. With three skippers still standing Peter asked those who had broached four times to sit down, which left just 2007 Etchells World Champion Oscar Strugstad of the Laurie Davidson designed Blackfun standing, which only goes to prove that even the best in the world can find a Quarter Tonner hard to handle in big breeze! Fortunately all that rocking and rolling didn’t seem to hold them back too much and they clocked up a second, eighth and seventh to put them into fifth place overall.

Sailing with Oscar on Blackfun this week is his Etchells World Championship winning crew Simon Fry. Sailing with Rickard Melander aboard the Phil Morrison designed Alice II is Andy Beadsworth, who was Oscar and Simon’s third crew member at that Etchells Worlds. Clearly Andy was missing his team mates today and decided to visit them when Alice II broached and found herself “kissing” Blackfun. Alice II was on port so took a penalty and John Corby put in some late night overtime to fix the hole in Blackfun so she will be back out on the water today.

Welcomed to the revival Quarter Ton fleet for the first time today was Diarmid de Burgh-Milne, whose recently purchased Lacydon Protis, winner of the 1981 Quarter Ton Cup, has just come out of a major refit at Casse Tete. Today was the first time Diarmid and his crew had actually sailed the boat and the first order of the day was to get the new sails out of their boxes and hope they fitted. Fortunately they did and Daiarmid reported that they enjoyed a fantastic day on the water, albeit one with a very steep learning curve!

Another boat making her first appearance at a Coutts Quarter Ton Cup revival is the Laurie Davidson designed Hellaby, now owned by Robbie Stewart. Her addition to the fleet means that today we had the the entire podium from the 1980 Quarter Ton Cup racing together for the first time in 36 years – Lousie Morton’s Bullit which won the 1980 event, runner up Hellaby and third placed Anchor Challenge, now owned by Paul Gibbons.

The Corinthian Division, for all amateur crews, is led after day one by the French team of Pierre Paris aboard the Tony Castro designed Pinguin Playboy, which crossed the channel on her own bottom to be here this week and won all three Corinthian races today. Lying five points behind her in second is George Webb’s Ed Dubois designed Flashheart who made a poor early sail choice as crewmember Geoff Dakin explains; “Early on we went with the big masthead kite, but we were all over the show wiping out left right and centre, so we swopped to the fractional kite and were much happier.” Third place in the Corinthian Division after day one is held by Rob McLean’s Spider Pig, which was designed by Olivier Gilbert and is tonight just one point behind Flashheart.

Introduced in 2015, the Low Rating Division, for which the Roger Swinney Trophy will be presented, allows the older and smaller boats a chance to shine and after three races it is led by Piers Hugh Smith racing the Julian Everitt designed Magnum Evolution with Flashheart in second and Spider Pig third.

The forecast for day two of the regatta is for much lighter winds which will bring welcome respite for many. The regatta continues until Friday 17 June with up to nine races scheduled.

You can follow the latest news, results and images from the event at the Coutts Quarter Ton Cup Blog. Further information about the event is available from www.rys.org.uk, or from Quarter Ton Class Secretary Louise Morton on louisemorton@me.com or +44 (0)7769 972979.

This entry was posted in Courts Quarter Ton Cup 2016. Bookmark the permalink.